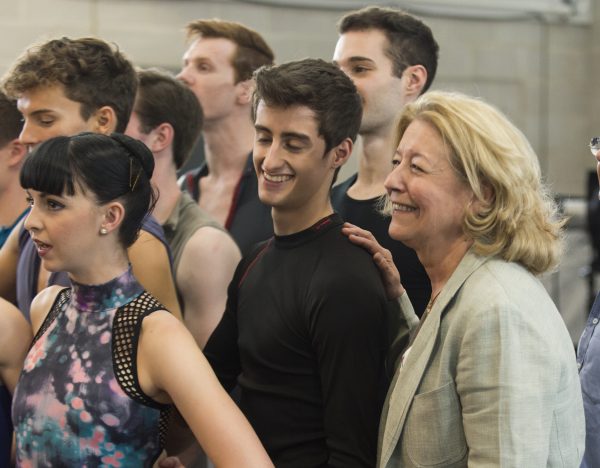 Karen Pilkington-Miksa B.Ed., ARAD grew up in England and Washington D.C. She trained as a classical dancer and performed with the Seattle Ballet before moving to London to pursue her career as a freelance dancer and choreographer. She’s choreographed for opera groups and BBC television, formed her own ballet company, Chelsea Dance and she started the Knightsbridge Ballet School in 1979.

Her work in mounting ballet led Karen to a second career as a painter and sculptor.  She subsequently studied at the Academy of Fine Art in New York and at Heatherley School of Fine Art in London. Karen’s sculpture and paintings, which reflect a fascination with the human figure and dancers in motion and performance, have been exhibited in the US and UK and are found in many private collections.

In 2011, Karen founded NEBT to showcase new choreography and to support the careers of emerging dancers, artists, designers and choreographers. So far, the company has commissioned 16 new dance works, furthered the careers of 57 young dancers and showcased the talents of 12 emerging choreographers, 47 musicians and 11 designers. We are a proud partner organisation of the Lyric Hammersmith and collaborate regularly with Cheltenham Music Festival, Garsington Opera and Latitude Festival. This year saw the launch of our Blueprint for Partnership scheme in association with The Royal Ballet, Northern Ballet and Birmingham Royal Ballet.

Her most recent commission What Got You Here, a creation for Dutch National Ballet Junior Company, premiered in January 2019 in Amsterdam to critical acclaim and was also performed at the ROH Linbury Theatre in London in July 2019. Upcoming commissions include a new work for Birmingham Royal Ballet as part of ‘Ballet Now’ which will premiere at Sadler’s Wells in June 2020.

Carleen has been working part-time for NEBT since February 2019.

She has previously worked in administration for artist management and executive search. Carleen has a background in opera working with companies including ENO, WNO and The Royal Opera. She graduated from the Guildhall School of Music & Drama London gaining a Masters of Music with Distinction.

Helga joined NEBT part-time in May 2019.

She has been working in the arts and heritage sectors since 1995, various roles including marketing, communications, public engagement and fundraising, both in Germany and in the UK.

After producing for the Young Shakespeare Theatre company, which she founded with a friend straight out of university, Margaret moved into publicity and fundraising for the arts.

She has had more than 30 years of experience in Development, most recently at the Royal Opera House, where she spent ten years. Prior to that she focused on fundraising for dance working with English National Ballet and London City Ballet.

Patrick began his formal dance training at the Conservatory of Music, University of Cincinnati, and received scholarships to study at both the American Ballet Theatre’s school in New York and the School of American Ballet.

At the age of 14 Patrick was invited to join the Cincinnati Ballet Company, and by the age of 17 had advanced to the rank of soloist. In 1977 he received an invitation to join the New York City Ballet under the direction of George Balanchine (“Mr B”), where he also had the good fortune to work with Jerome Robbins and Peter Martins.

Following an invitation from Mikhail Baryshnikov, Patrick joined American Ballet Theatre in 1981, where he worked with, amongst others, Kenneth MacMillan, Glen Tetley, Natalia Markarova, John McFall, Roland Petit, Eugene Loring, Choo San Goh, Lynne Taylor-Corbett, Anthony Tudor and Erik Bruhn. In 1983, Patrick returned to New York City Ballet. Upon his retirement from the stage he assumed the directorship of “SOHO Booking”, a program that assisted with the management of avant-garde emerging dance artists/groups.

In 1992 Patrick was recruited for the position of ballet master and interim director for Hartford Ballet, Connecticut, and has since served in management positions for several other companies throughout the US and Europe, including assistant to the director for Ballett Ulm (Germany), ballet director for the Southold Dance Theatre (USA), artistic director of the Evansville Ballet (USA), Vocational Manager (assistant to the director) Elmhurst School for Ballet in Association with the Birmingham Royal Ballet (UK) and ballet master with Aalto Ballet Essen.

Matz has enjoyed an extensive career at the highest level in both classical ballet and contemporary dance, working with artists such as Mark Morris, Mats Ek, Jiri Kylian, Sir Fredrick Ashton, and Rudolph Nureyev to mention but a few. Companies he has danced with includes The Royal Swedish Ballet, English National Ballet, Netherlands Dance Theatre, and Rambert Dance Company. In 1996 Matz was appointed Artistic Director of the Royal New Zealand Ballet. From 2001 to 2005 he was Artistic Director of English National Ballet. Since 2006 Matz is pursuing a freelance career as international guest teacher, artistic consultant and personal and professional development coach; working in these capacities with several national dance companies and schools.