Born and raised in Stockholm to an Indonesian father and Swedish mother, Viktor started playing the piano at the age of ten. After attending one of the foremost specialist music schools in Sweden and winning prizes in several piano competitions, Viktor moved to London in 2004 to pursue studies at conservatoire level, under the tutelage of Caroline Palmer and Paul Roberts at the Guildhall School of Music & Drama. He continued his musical education with Tatiana Sarkissova at the Royal Academy of Music, from which he graduated with a Master of Arts in Piano Performance as well as the LRAM Teaching Diploma. Viktor is the recipient of scholarships from the Gålö Foundation, H.T. Cedergren Foundation, Helge Ax:son Johnson Foundation, and the Royal Academy of Music in Stockholm. He has participated in masterclasses with Kevin Kenner, Yonty Solomon, James Gibb, Pascal Devoyon, and Christian Blackshaw. In 2011, Viktor was selected by the WAM Foundation as a piano teacher at the Calcutta School of Music, India, and he is currently teaching at the Lanterns School of Performing Arts in London.
Viktor’s performances include solo and chamber music concerts in the UK, Spain, India and Sweden. Apart from sharing music with others by giving piano recitals and through teaching, Viktor is passionate about cross-art collaboration.

Praised for its ‘refreshing approach’ and ‘exciting precision’, the Gildas Quartet is fast establishing itself as one of the most exciting young ensembles to emerge in recent years.

As Park Lane Group Young Artists and winners of a Tunnell Trust Concert Award, the quartet has performed to critical acclaim across the UK and Europe, at major venues including the Purcell Room and Wigmore Hall and live on BBC Radio 3.

Passionate performers of all repertoire from old to new, the quartet has recently had the privilege of working with both Colin Matthews and Sir Harrison Birtwistle on performing the composers’ most recent string quartets at London’s Southbank Centre and The Forge. The quartet performed live via video link in New York’s Carnegie Hall for the American Composers’ Orchestra, giving the world première of Ray Lustig’s ‘Latency Canons’ which received a glowing 4-star review in the New York Times.

The Gildas Quartet has enjoyed a busy 2014-15 season including recitals at the Two Moors Festival, Hampton Court Palace, the Conway Hall and Purcell Room, and an extensive Scottish tour reaching from Edinburgh to Orkney. The quartet is delighted to have recently been appointed Junior Fellows at the Birmingham Conservatoire.

Andrew Harvey is a British violinist who enjoys a busy and varied career as a soloist, chamber and orchestral musician. He studied in London at the Royal Academy of Music, where he was awarded a master’s degree with distinction.

As a soloist, Andrew first appeared at the age of 12 performing Bach’s E Major Violin Concerto with the Apollo Ensemble. Most recently, he has given solo performances throughout Europe with the European Union Chamber Orchestra.

Until 2013, Andrew was a member of Royal Northern Sinfonia, which regularly gives performances at the Sage Gateshead on BBC Radio 3 and Classic FM. He is now assistant leader of Royal Liverpool Philharmonic Orchestra, enjoying a busy schedule of recordings, concerts and tours. As well as his performances in Liverpool, Andrew regularly plays with English Chamber Orchestra – a recent highlight was a concert at Vienna Musikverein with violinist and conductor Julian Rachlin.

Aside from his classical performances, he has appeared on albums for artists such as Seth MacFarlane and Emeli Sande, and has made numerous recordings for TV and film including Poldark, Call the Midwife and Woman in

Anne was born in Normandie, France. She began piano lessons at the age of three. She then went on to study at the Conservatoire Superieur de Paris with Pierre Reach (a pupil of the great Artur Rubinstein) and Alberto Neuman (a rare student of Arturo Benedetti Michelangeli). At the age of just eleven, she was invited to perform in concert at the Festival International d’Annecy, and a year later at the Festival International de Montdauphin. Anne then moved to the UK to further her education at the Royal Academy of Music in London with Hamish Milne. She also studied composition with Ruth Byrchmore, chamber music with Michael Dussek, and jazz with Dominic Alldis. She then undertook a Masters in Composition at Kings College, London. During her academic years, Anne took part in many masterclasses, including those run by Pierre-Laurent Aimard, Roger Muraro, Miriam Solovieff, Andrei Diev, John O’Connor and Rolf Hind.

Since graduating, Anne has performed throughout Europe, in countries including Portugal, Norway, Italy, England, and France, as well as in Brazil. She has represented France and the UK in official engagements in both concerts and masterclasses. She has been broadcast on ITV, the German station ZDF, the radio station France Musique (Radio France group), French national TV network, France 3, and the European network, Mezzo.

Anne leads collaborative work with artists from various avenues, from acting to dance companies. This includes an instrumental project with producer and programmer, James Sanger, well known for his million selling work with Dido, Keane, U2 and The Cure.

Anne’s deeply personal debut album Beyond (and Below) which comprises her own piano works was recently released to rave reviews on Discovery Records. She has just recorded a new album engineered by multi-award winner, Mike Hatch (Grammys, BAFTAS and Gramophone Awards), which will include the first commercial release of Carl Vine’s ‘Piano Sonata’. She has also just recorded the sonatas by Franck, Faure and Poulenc for the label Champs Hill Records with Grammy Award producer Raphael Mouterde and violinist Giovanni Guzzo due to be released in January.

The internationally acclaimed composer and conductor Richard Blackford was the first Director of Music at The Royal Ballet School, during which time he conducted in a Gala for Ninette de Valois at the Royal Opera House. His many credits include productions at the Royal National Theatre, Bruno Philharmonic (where he was Composer/Conductor-In-Residence), Cheltenham Festival, BBC and Classic FM broadcasts, and his work has been recorded on the Decca, Warner, Sony and Nimbus labels.
www.blackford.co.uk

Emma trained at the Motley Theatre Design Course and previously completed a BSc in Architecturefrom the Bartlett School UCL. She won the Linbury Prize 2011 for the Royal Opera House Linbury Studio withRoy Orbison in Clingfilm.

Theatre and opera credits include Lia’s Guide to the National Lottery at the Bridewell Theatre,Sevastopol at the Royal Opera House 2, Song of Songs at the Swan Theatre RSC and Overruled at the Old Red Lion.

Emma has assisted designers in opera, theatre and film such as Tom Piper, David Fielding, TomCairns and Charles Edwards.

Whilst currently working on the Kreutzer Sonata for the NEBT she is also designing a verbatim pieceListen, we’re family at JW3. Emma also continues her fascination with 2D and 3D design and performance by teaching as part of ADa Collective.

Born in Brescia, Italy, Valentino trained at La Scala Ballet School in Milan and The Royal Ballet School, London, where he graduated in 2007. He then worked with Heinz Spoerli’s Zurich Ballet for two years and Norwegian National Ballet for one year before joining The Royal Ballet in 2010 where he was promoted to soloist in 2012. During his dancing career he has created roles in ballets by Heinz Spoerli, David Dawson, Liam Scarlett and Christopher Wheeldon while working with many other choreographers including Nacho Duato, Jivrí Kylián, John Neumeier and William Forsythe.

Valentino’s choreographic career started at the Royal Ballet School where he won the Ursula Moreton Choreographic Competition in 2006. Since then, he has created numerous pas de deux, solos and pieces for the Royal Ballet’s Draft Works from 2011 to 2015. In collaboration with the composer, Philip Glass, and with the assistance of the Royal Opera House Music Department, Valentino developed the three movement ballet Orbital Motion, produced by New English Ballet Theatre with costumes by Emma Bailey.

Description of the ballet – Enticement’s Lure

A lyric investigation of the character of two couples and ‘temptation’, which can sadly destroy relationships. 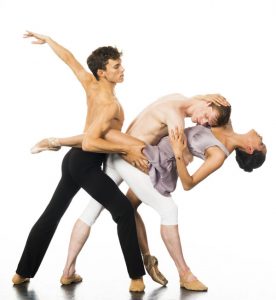 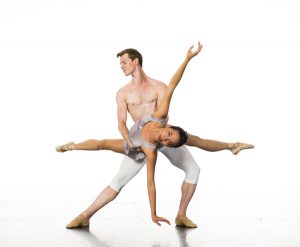 Born in Liverpool, Kristen trained with Elizabeth Hill before joining The Royal Ballet Upper School in 1999. She danced in Christopher Wheeldon’s Souvenirs and Steven Greenston’s Interpretations for the school’s annual performance before joining the Royal Ballet in 2002. She was promoted to First Artist in 2007 and then Soloist in 2009. Her repertory includes Swan Lake, Manon, Romeo and Juliet, Ballet Imperial, Les Rendezvous, Gong, La Valse, Daphnis and Chloë, Onegin, The Lesson, The Seven Deadly Sins and Carmen.

An increasingly successful choreographer, her previous choreographic achievements include Yes We Did and Don’t Hate the Player, Hate the Game both of which were created for the New Works performances at the Linbury Studio Theatre in the Royal Opera House. She also created Metheus for BalletBoyz the TALENT in the Linbury Studio Theatre. Her ballet Lonesome Gun was performed to great audience acclaim in NEBT’s debut season in 2012, as well as Mad Women in 2014 and 2015. In Summer 2016 NEBT brought both ballets to Latitude Festival and Canary Wharf Summer Sessions, to great acclaim.

Description of the ballet – Moonshine

In this work, Kristen explores, with her usual wit, the concept of the ‘pilgrimage’ – a person’s journey or search for moral or spiritual significance.

In 2016 she created Uirapuru for Ballet do Theatro Municipal do Rio de Janeiro; the work was successfully received by both critics and audience. She also created works for São Paulo Companhia de Dança, Dutch National Ballet’s School, School of American Ballet (as part of the New York Choreographic Institute) and the Liverpool Institute of Performing Arts.

Daniela holds a first class degree in Arts Management. She works with NEBT as Company Manager and Ballet Mistress. She is also one of NEBT’s choreographers and created works for the company in 2014 and 2015. She was recently cited as ‘new name to watch’ by Dance Europe Magazine’s Critics’ Choice for these works.

Description of the ballet – Vertex

“Being Brazilian myself, researching music from my native country, I uncovered an undiscovered gem which I am delighted to explore with NEBT’s energetic young dancers. The material was created in close collaboration with the dancers, finding the dynamic and the intention of the movements in response to the music and the mesmerising drawings of Anne Christopher RA.” 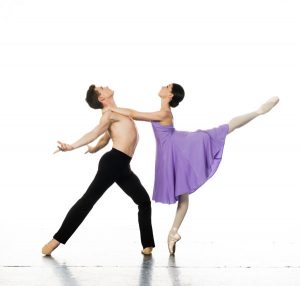 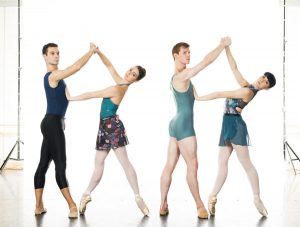 “…the company contains a body of talented young artists technically equipped to cope with tremendous varied choreography…Lonesome Gun by Kristen McNally is a perfect example of movement, mood and music in artistic unity.  NEBT fulfils an important need, long may it continue.”